Acupuncture Practitioner in Hebden Bridge Since 2006

The Chinese and other Eastern peoples have been using acupuncture to restore, promote and maintain good health for about 2,500 years. Stone needles were originally used, and later bronze, gold and silver needles. The first medical account of acupuncture was ‘The Yellow Emperor’s Classic of Internal Medicine’ which dates from about 300 BC. Acupuncture is rooted in the Daoist philosophy of change, growth, balance and harmony, and this text outlines the principles of natural law and the movements of life – yin and yang, the Five Elements, the organ system and the meridian network along which acupuncture points are located. Amazingly, these records also contain details of pathology and physiology which provide the theoretical foundation for acupuncture today, some 2000 years later.

Acupuncture practice was gradually developed and refined. During the Ming Dynasty (1368- 1644), the famous Chinese herbalists Li Shi Zen published his 50-volume ‘Compendium of Materia Medica’, as well as a study of the Pulse and the Extraordinary Meridians. But from the mid-seventeenth century there was a decline in acupuncture and herbalism which coincided with the increasing influence of Western ideas on China.

Although acupuncture was always practised in rural communities, it was not until after the Liberation and the establishment of the People’s Republic in 1949, that there was a great resurgence of interest in it at a national level. During the Cultural Revolution (1966-76), with the persecution of surgeons and doctors practising biomedicine, traditional Chinese medicine was given new opportunities to develop. Today acupuncture is used far more extensively in China than in the West, in a hospital-based system with facilities for treating acute as well as chronic cases. The national policy is to pursue both systems side by side, with extensive clinical research. 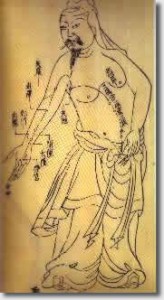 In Britain, serious study of traditional acupuncture did not develop until the 1950s and early 1960s. The links were made either through Europe or through direct contact with teachers and schools in Taiwan, Korea and elsewhere. The serious students of acupuncture came from the ranks of those who were already interested in, or who actually practised, natural medicines – osteopaths, homeopaths and naturopaths. To many it seemed that traditional Chinese medicine had formalised and set down many of the concepts they had found through their own experience.

There has been a steady increase in the number of professionally trained practitioners in the UK, from just a handful of qualified acupuncturists in the 1970’s to many seen today.